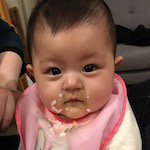 It’s cold, cold, cold, and there are only a few days left. It’s nice to have hot sake. I’ll be doing a hot sake series soon, but again, it’ll be cold for the time lag until I post it.

The variations of sake are based on the time of year (four seasons), the specific name (eight types), and the brand name (many), which means 4x8xmany=many, so you have to get the major ones first. If I have trouble with a specific name, I’ll give priority to the limited ones. This time, I was troubled. I wandered over to the Azabu Juban Hasegawa Liquor Store again. There were many famous ones, and after much deliberation, I decided on this one.

It’s a sake brewery in Yamanashi Prefecture with a history of nearly 300 years, and the Meiji Emperor even used it as his official residence. It seems that they have also developed Koji Sugar here and have a cafeteria. It is said that the natural sugar syrup is made from rice, water, and wheat. It’s a great use of rice to get sweet sugar from rice.

This sake brewery also sells cosmetics. I remember when I was in China, I bought a couple of sake lees packs for my friends when I went back to Japan. Thank you for the rice.

Aromatic sake is one of the four taste categories, and is often applied to “Jummai-shu” and “Tokubetsu (special) Jummai-shu”.The taste classification is based on the person’s perception, so it varies from person to person.
“Ginjo-shu” and “Special Daiginjo”, which have a higher ratio of polished rice, tend to fall into this category. “Ginjo-shu”and “Special Daiginjo” are often classified as such because they are made in a process that retains the full flavor of the rice, rather than being perfumed.

The difference between “Ginjo” and “Jummai” is that Ginjo requires the addition of ingredients other than rice and malt to complete the production process.
Jummai, on the other hand, uses only rice and malt in the production process, so there is no mixture and it is the most authentic way to make sake.
In general, the taste is not as sweet as that of white wine, but rather the sweetness of the rice and the sourness and aroma of the malt used are combined to create a traditional flavor that is full-bodied and crisp. It can be described as “rich”, “full-bodied” or “ample”.

Comment A;
It smells like melon botanicals, and it smells gorgeous 😊 My husband chose this one to go with the yellowtail, kiss, and medallion sashimi we bought at a local fish shop I’m having a cold glass of Shichiken Daiginjo 🥂! I’m off work tomorrow, so I’ll still be enjoying my evening drink❗️

Comment B
It is gorgeous on the nose, with a light sweetness on the palate and a touch of rice as it passes down the throat. The water used for brewing the sake must be good, because it has a beautiful taste and can be drunk forever. It is an all-round sake that goes well with both meat and fish. Thank you very much.

The mouthfeel is light and has a strong aroma, and the moment you drink it, you get the sourness characteristic of sake. It’s a father’s sake. Rather than being fruity, it tastes like “silk,” as it has been described, and rather than being a white wine-type scented sake for women, it is a refined version of the sake of the past. If you are not a regular sake drinker, your brain may react to the smell at first. It has a crisp and sharp royal taste.

By the second sip, you will get used to the taste and be able to drink it. It is a sake that has the potential to be consumed in a matter of seconds if it is paired with fatty tuna sashimi, boiled fish, or other rich flavors. This is a sake that will refresh your mouth when it is full of fat.

Tonkatsu (pork cutlet) with sauce is the main dish this time.

This is a snack that you can easily get at a convenience store in Japan. It can also be used as a snack.

It’s saucy and doesn’t contain meat, but it’s reasonably priced and delicious if you miss the taste of pork cutlets.

Today, as usual, I am drinking alone. Bakuren, which I’…

Fusion of dry and summer to drink in summer Super hot

A little sake alone on a hot day. A sudden heavy rain o…